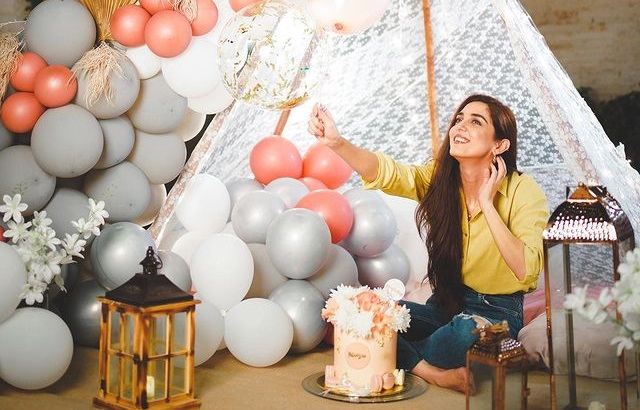 Maya Ali is a Pakistani actress who has appeared in several films. Ali is well-known for her roles in both dramas and films, and she has received one Lux Style Award out of a total of four nominations for her work.

She was born on July 27, 1989, in Lahore, Pakistan, where she has lived her entire life. She is currently residing in Karachi, Pakistan, with her family. She began her professional acting career in 2011, and today she is one of the most talented and well-liked actors in the entertainment world.

A large cake, balloons, and happy birthday wishes are all on the agenda for her 32nd birthday celebration.

The actress took to Instagram on Tuesday to express her gratitude to her fans, saying that she considers herself ‘lucky’ to have made it through another year.

Besides a yellow blouse and jeans, she was also sporting a blue bow headband.

Also beaming was the divas’s presence, which included an abundance of red and grey balloons and a peach fondant cake in the palm of her hand.

On her special day, pals from the fraternity were ready to shower the actor with affection and gifts from their hearts.

“MashAllah………..u amazing beauty, you are. “Many wonderful returns of the day and a very happy birthday to you,” commented Yumna Zaidi on Facebook.