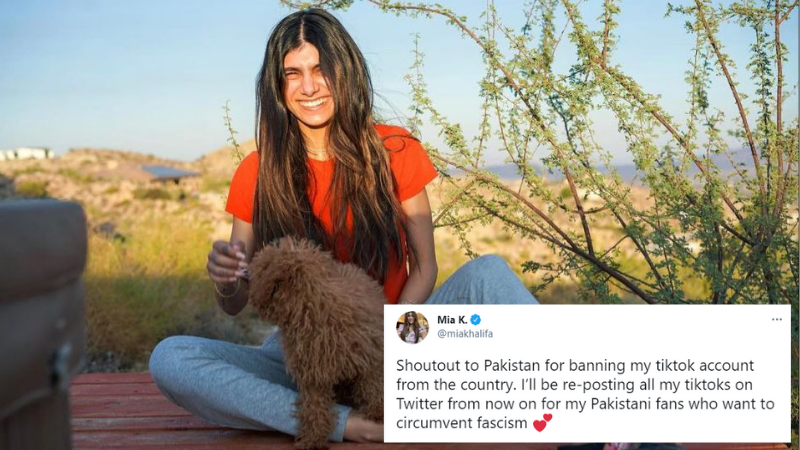 "I’ll be re-posting all my TikToks on Twitter from now on for my Pakistani fans who want to circumvent fascism," she said.

The PTA has blocked and unbanned TikTok twice and is now considering a new method of censoring posts on the social media app — individual account bans. The account of media personality and sports analyst Mia Khalifa has been blocked in Pakistan, but she is not cooperating with authorities seeking to deprive Pakistanis of her news.

The PTA agreed to block her account in the country without any official statement and without explaining how or why.

When Pakistanis saw the lack of her material, they took to Twitter in a frenzy. Their cries finally reached Khalifa’s ears and astounded her.

Pakistanis accompanied her. They were displeased with the decision and reacted angrily.

This user inquired as to what the PTA’s function was. They were all praises for Khalifa, on the other hand.

Clearly, the ban posed no danger to the Lebanese-born influencer and was instead perceived as a challenge. She also gave us props for doing so. Then, much to her fans’ joy, she announced, “I’ll be re-posting all my TikToks on Twitter from now on for my Pakistani fans who want to avoid fascism.”

Everything is finite, says Prince Harry while on ‘dicey grounds’ with the royal family