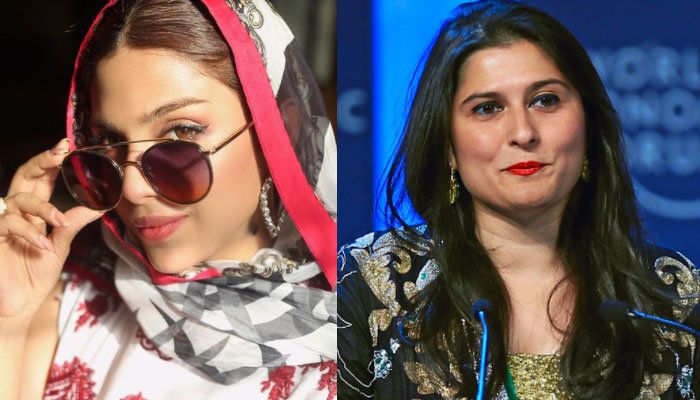 Sonya Hussyn is retaliating against Sharmeen Obaid Chinoy, accusing her of putting a strain on her ‘upbringing.’

“Pulling one woman down while simultaneously lifting another up in full presence of the public and bringing up the subject of upbringing! Aside from that, the pandemic has given some people far too much more time to “dis” others by misconstruing statements made by others “Sonya was the one who started it all.

“If you had asked me which of the films I’d choose, I would have said “Verna,” because it’s one of my favorites.

Freedom of expression in the context of one’s job is in no way disrespectful, says the actor in his subsequent statement.

“Ms. Chinoy, your choice of words, tone, and tenor do not reflect the dignity of an Academy Award Winner, and in case you didn’t know, I have never wanted to be Mahira, as you may have guessed. In her own way, she’s brilliant and amazing, and I’m embarking on my own adventure “Sonya came to a conclusion. 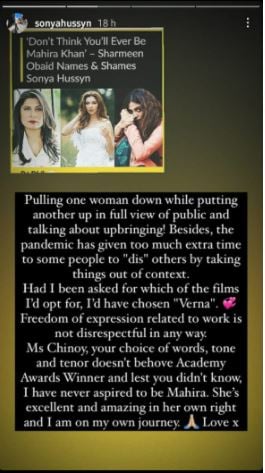 This follows Sonya’s criticism of Shah Rukh Khan for labeling Mahira Khan’s position in Raees as “inferior” to Shah Rukh Khan’s in a recent interview with the Hollywood Reporter.

“Don’t imagine you’ll ever be Mahira Khan, therefore you won’t ever get to say no,” Sharmeen said in response to the actor’s words about Mahira.

In the end, she said, “Don’t make fun of other women in the industry; it reflects ill on you and your upbringing.”