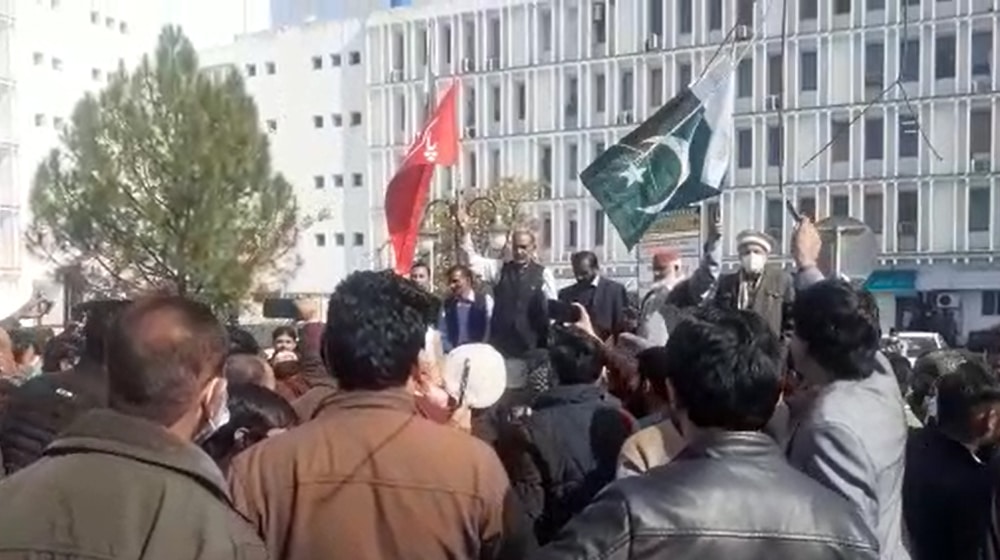 In a protest at D-Chowk Islamabad on Friday, government employees from various state institutions called for several demands and rejected a recent increase of 15 percent in salary as a discrepancy allowance, according to the protesters.

It has been reported that government employees from the Railways, Water & Power Development Authority (WAPDA), the Education Department of Balochistan, and the Hydro Union organised a demonstration against the administration. With a 15 percent pay increase, they believed that the government was attempting to distract attention away from their legitimate concerns and demands.

The demonstrators claimed that the government was not even paying staff of its own institutions the minimum salary of Rs. 20,000, as required by law. They said that the administration was a ‘hypocrite’ that did not follow through on its pledges.

They voiced their disappointment that a big number of employees were in a state of desperation since, despite having worked for the company for many years, they had not been regularised. He said that countless individuals had been working on a contract, ad hoc, or contingency basis for the past eight to twenty years, but that they had not been given permanent employment. His statement stated that all contract, ad hoc, contingency, and daily pay employees wanted their positions to become regularised.

Samiullah, the chairman of the IESCO Workers Association, spoke at the event and stated that privatisation of state-owned firms was not acceptable at whatever cost to the nation. He stated that the government was considering privatising electricity distribution businesses as part of a scheme run by the International Monetary Fund.

His observations included the fact that numerous state institutions were short of workers as well as finances, and that there was no timely advancement in any of them. He said that the administration was concealing its incapacity to implement changes in any of its several institutions.

Among the entities targeted by the government’s privatisation programme are the WAPDA, the Post Office, the Federal Government Educational Institutions, Tourism Development, the PIA, and the Railways, according to him. We believe that the government should be aware that a 15 percent pay raise is insufficient to make us permanent and to bring about improvements in the educational institutions.