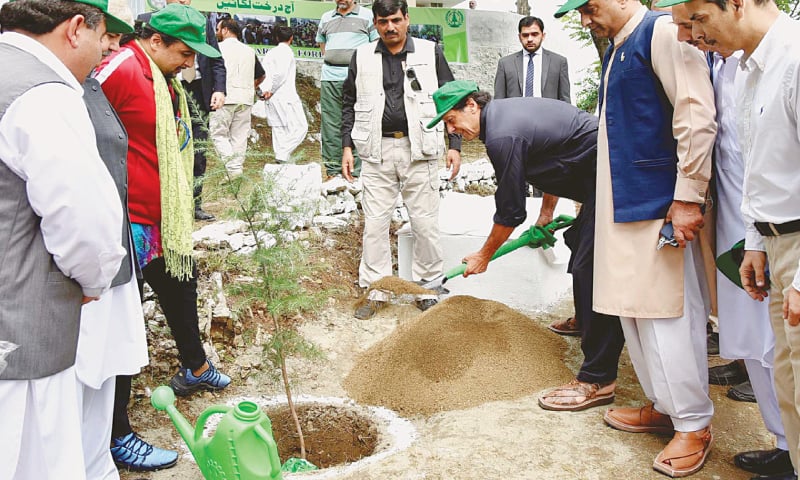 Prime Minister Imran Khan invited all citizens to fully engage in the government’s monsoon tree plantation effort, which is intended to transform Pakistan into a green country.

The prime minister shared a series of photos on his Twitter account, in which he can be seen planting a pine tree in Nathia Gali.

Pakistan’s prime minister wrote on Twitter, “Planting pine trees in Nathia (Gali) as part of our monsoon planting trees campaign. I want our entire nation to contribute in the greening of Pakistan.”

The prime minister had repeatedly encouraged the people, particularly the youth, to actively participate in the country’s largest tree planting program in his earlier tweets, which he had done on a number of different occasions before.

”I want to encourage all Pakistanis, especially [especially] our youth, to become involved in the largest tree planting initiative in our country’s history. The prime minister previously stated on the popular social media sites that “we have a lot of catching up to do.”

He also stated in a linked tweet that “we will be gearing up this monsoon season for our plantation push, which will be the largest in Pakistan’s history.”

Previously, he declared his great determination to leave “a clean and green Pakistan for future generations” of the country, as mentioned in another previous tweet.

Read Also
Sindh schools will be closed until 19th August

Additionally, the prime minister had shared photographs and video footage of large tracts of land in Matta Swat, Khyber-Pakhtunkhwa, and Bhakkar, among other places, that had been transformed into green spaces thanks to the “Ten Billion Tree Tsunami” and “Clean, Green Pakistan” programs.

“The greening of Pakistan is intended for future generations,” he stated in a tweet on July 20th, according to a translation.