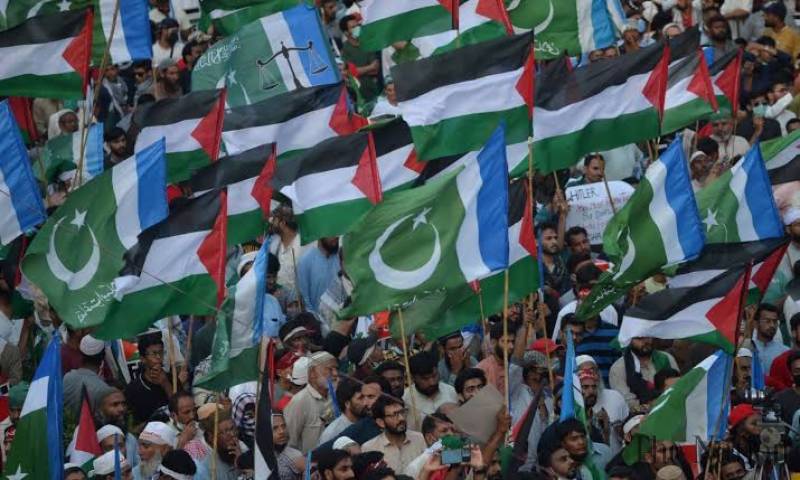 On Sunday, tens of thousands of marchers filled the main street of Pakistan’s commercial capital to express solidarity with Palestinians.

The marchers gathered at Shahrah-e Faisal, waving Palestinian flags and shouting slogans such as “Labaik ya Aqsa” and “Out with Israel.”

Thousands of mothers, some of whom were bearing children, also took part in the Jamat-e-Islami protest (JI).

“Al-Aqsa, your protection is our religion,” was engraved on a large banner borne by a group of women, while another group of youth dressed in T-shirts depicting the Al-Aqsa Mosque carried a massive Palestinian flag in the centre of the demonstration.

Read Also
Karachi's electricity supply has now back to full strength, according to K-Electric

In a phone call, Hamas leader Ismail Haniyeh said that the entire Muslim group is rallying behind its conventional support for Palestinians in the aftermath of Israel’s aggression.

“Israel wishes to usurp our territory, and we will not allow that to happen. In this war, our valiant citizens beat the invading powers, exposing Israel and its nefarious ideology “Haniyeh went on to explain.

“Our resistance is made up of the blood of our forefathers, youths, mothers, and girls. “We will never hesitate on that,” he said, adding that Palestinian opposition has shown that their fight is “just.””

The most recent Israeli provocation, he noted, has caused a number of significant shifts in the global scenario and revealed Tel Aviv’s “nefarious plans.”

He expressed gratitude to Pakistanis for their unwavering love for the Palestinians in their struggle.

He hoped that the Pakistani government would continue to advocate for the Palestinian cause in international forums.

In his speech to the rally, JI leader Siraj-ul-Haq congratulated Palestinians and Hamas on their “successful” resistance to Israeli forces.

“You can burn houses, slaughter unarmed women and girls, and bomb civilians, but you can’t destroy the resistance, which will persist until Palestine is free,” Haq said.

Criticizing Western powers, especially the United States, for failing to stop Israeli violence, he said that it was the incredible resilience of unarmed Palestinians that forced Tel Aviv to agree to a cease-fire.

He insisted that the entire Pakistani community stands in solidarity with the Palestinians in their just struggle.