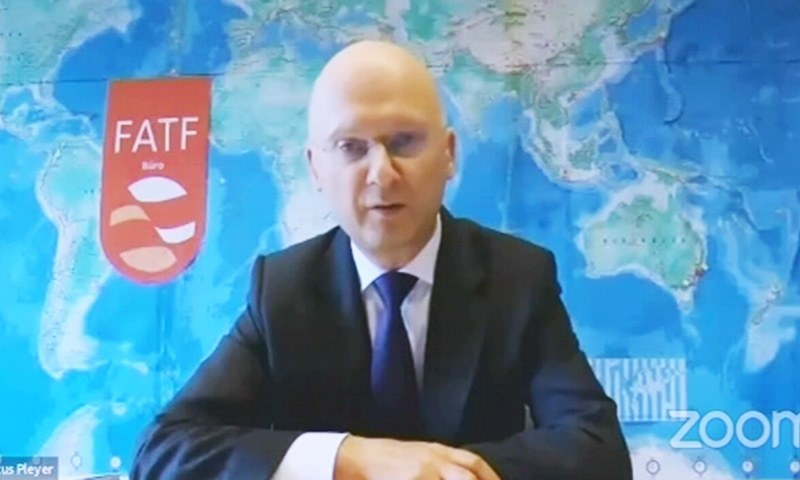 ISLAMABAD: Despite meeting 26 of the 27 conditions, the Financial Action Task Force (FATF) maintained Pakistan on its grey list on Friday and handed out a fresh six-point action plan, leaving Islamabad vulnerable to global pressure tactics.

The FATF, the worldwide group tasked with combating terrorist funding and money laundering, revealed its decision at the end of the watchdog’s five-day virtual plenary conference, which was presided over by Marcus Pleyer of Germany.

The FATF did note, however, that Pakistan had fulfilled all but one of the 27 elements in the action plan and had opted to maintain it under “increased monitoring.”

According to the global body, “the FATF encourages Pakistan to continue to make progress toward addressing the one remaining CFT (combating the financing of terrorism)-related item as soon as possible by demonstrating that TF (terror financing) investigations and prosecutions target senior leaders and commanders of UN designated terrorist groups.”

According to the member countries, including the United States and India, who have circled Pakistan through the FATF platform, the final action item was the most important of all.

Pakistan was placed on the FATF grey list in June 2018 and was instructed to undertake a 27-point action plan in order to be removed from the list.

The FATF president noted that Islamabad had made significant progress on the global watchdog’s action plan since June 2018, when Pakistan made a high-level political commitment to work with it and its Asia/Pacific Group (APG) to strengthen its anti-money laundering and combating the financing of terrorism (AML/CFT) regime and address its deficiencies.

“The FATF acknowledges Pakistan’s progress and attempts to resolve these CFT action plan items,” he continued.

|[The FATF] notes that Pakistan has made progress toward completing two of the three remaining action items on demonstrating that effective, proportionate, and dissuasive sanctions are imposed for TF convictions and that the [country’s] targeted financial sanctions regime is being used effectively to target terrorist assets since February 2021,” he added.

A new plan of action

According to the FATF, in response to additional deficiencies later identified in Pakistan’s 2019 APG Mutual Evaluation Report (MER), Pakistan has made progress in addressing a number of the MER’s recommended actions and provided further high-level commitment in June 2021 to address these strategic deficiencies under a new action plan.

According to the statement, the new action plan is primarily focused on countering money laundering.

“Pakistan should continue to endeavor to rectify its strategically vital AML/CFT inadequacies by strengthening international collaboration and modifying the Mutual Legal Assistance Act.”

Pakistan has also been asked to demonstrate that foreign countries are being sought for assistance in implementing UNSCR 1373 designations; and to demonstrate that supervisors were conducting both on-site and off-site supervision commensurate with the specific risks associated with designated non-financial businesses and persons (DNFBPs), including the application of appropriate sanctions where necessary.

The emphasis on DNFBPs means that real estate brokers, jewellers, attorneys, and chartered accountants will face increased scrutiny, according to an official who has stayed involved in these conversations.

Another additional demand imposed by the FATF is that Pakistan demonstrate that appropriate and dissuasive punishments are consistently applied to all legal persons and legal arrangements for non-compliance with beneficial ownership regulations.

It will also be required to show an increase in money laundering investigations and prosecutions, as well as that proceeds of crime are being restrained and confiscated in accordance with Pakistan’s risk profile, including collaboration with foreign counterparts to trace, freeze, and confiscate assets.

Finally, Pakistan would need to show that DNFBPs are being monitored for compliance with proliferation finance regulations and that sanctions are being implemented for noncompliance.

According to the finance ministry, the FATF examined Pakistan’s progress report on the 2018 Action Plan and Post-Observation Period Report (POPR) in its virtual Plenary on February 23, 2021.

According to the ministry, a total of 82 shortcomings were detected in Pakistan’s 2019 MER, which were included in the POPR as 67 suggested actions in 11 immediate outcomes, on which Pakistan reported progress.

Because of the progress made since the MER 2019, the FATF authorized a seven-point ML-centric action plan for Pakistan to undertake.

It went on to say that Pakistan has already given FATF its political commitment to implement the revised action plan.

According to a new research paper issued by an independent think-tank, Tabadlab, Pakistan has incurred a tremendous economic loss of $38 billion as a result of the FATF’s decision to keep the country on its grey list since 2008.

Dr. Naafey Sardar wrote the paper, “Bearing the Cost of Global Politics: The Impact of FATF Grey-listing on Pakistan’s Economy.”

16,560 health professionals have signed a contract for Covid-19