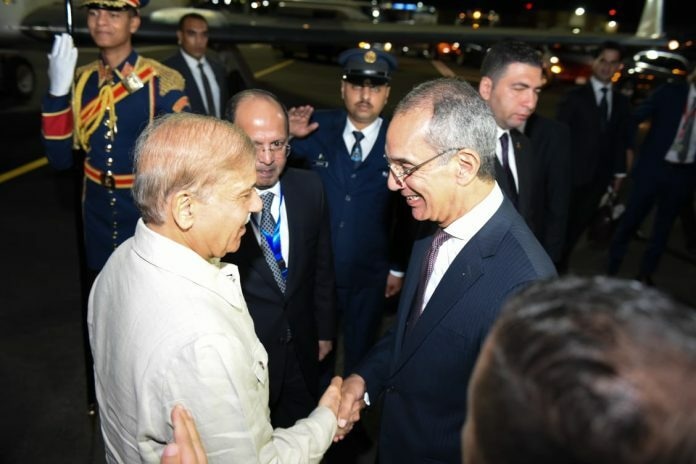 Sunday marked the arrival of Prime Minister Muhammad Shahbaz Sharif in Egypt for the “Sharm El-Sheikh Climate Implementation Summit,” which will take place on November 7 and 8.

High-ranking Egyptian government officials, the ambassador of Pakistan to Egypt, and representatives of the Pakistani embassy in Egypt met the Prime Minister upon his arrival at Sharm El-Sheikh International Airport.

Tuesday’s high-level roundtable meeting on “Climate Change and the Sustainability of Vulnerable Communities” will be co-chaired by the prime minister and his Norwegian colleague.

He will speak at other high-profile gatherings as well, including tomorrow’s Middle East Green Initiative Summit, which is being hosted by the Saudi Crown Prince Mohammad bin Salman, and a roundtable discussion hosted by the UN Secretary-General to introduce the “Early Warning Systems for Executive Action Plan.”

On the sidelines of the summit, the Prime Minister is also slated to have private talks with a number of foreign leaders.

Related Topics:EgyptGovernmentShahbaz Sharif
Up Next