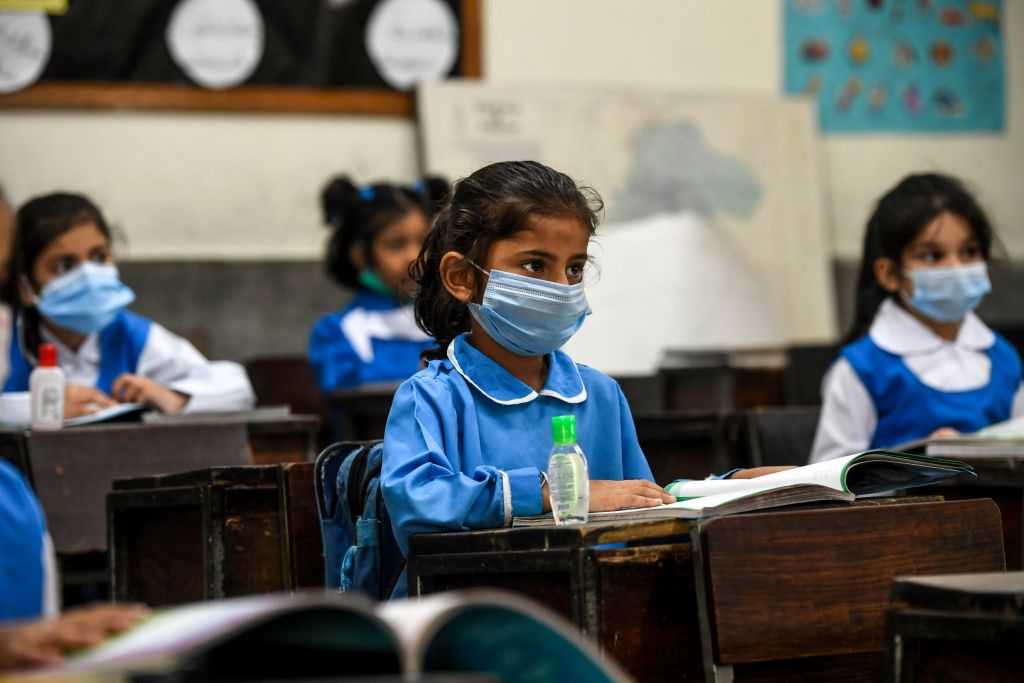 Children wearing facemasks attend a class at a school in Islamabad on September 30, 2020, after the educational institutes reopened primary classes in the third and last phase nearly six months after the spread of the Covid-19 coronavirus - Photo by AAMIR QURESHI via Getty Images

Sindh Education Minister Sardar Ali Shah announced on Sunday that schools in the province will resume on August 19. The minister indicated at a press conference with MPA Ismail Rahu that the intermediate exams will begin on August 10.

According to the education minister, “students will not be allowed to take their mobile phones inside the exam centers.” Teachers and examination personnel will also be prohibited from taking cell phones into the Centre.

According to Rahu, the government will not accept cheating at any cost.

Shah added that the decision to postpone the reopening of the school was made to assist kids.

He stated that schools will stay closed since pupils are having difficulty commuting due to Muharram parades, and that the province government will monitor the coronavirus situation for 10 days until August 19.

“Processions are held around the province beginning on Muharram 7, which presents complications for students,” he explained.

In response to a question, Shah stated that it was critical for the provincial administration to examine its curriculum. “We are still teaching children about the wonders of radio,” he remarked. “Does anyone have a radio in their house these days?” ” If public schools improve and develop, parents will almost likely not take their children to private schools,” Shah added.

“No parent wants to pay higher costs to send their children to private schools,” he remarked.

In response to a follow-up question, Shah stated that the Sindh government will make every effort to ensure that decisions made by the province administration and the Centre are consistent.

The Sindh government would also keep a tight check on whether or not school workers and instructors are vaccinated, he said.

World Bank is creating a 5 years strategy for Pakistan