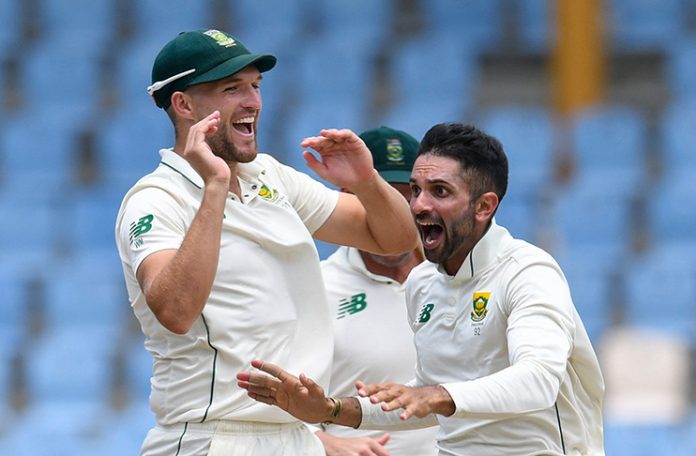 St. Lucia: Keshav Maharaj achieved just the second hat-trick by a South African in Test history as the Proteas won the second Test of the two-match series by 158 runs on Monday at the Daren Sammy Cricket Ground in St Lucia.

In the final over before lunch, the left-arm spinner dismissed Kieran Powell, Jason Holder, and Joshua da Silva in quick succession to join fast bowler Geoff Griffen in the record books, who accomplished the feat at Lord’s in 1960.

Maharaj then took two of the final three wickets to fall in the afternoon to end with five for 36 as the West Indies were dismissed for 165.

Following a dominant innings and 63-run win in the first Test a week earlier at the same venue, South Africa won the series 2-0, their first away series victory since 2017 in New Zealand.

“This is significant for us because we haven’t won on the road in a long time,” South African captain Dean Elgar said.

“There may be teething problems as captain, but this is a positive, significant step forward.”

The host team started the day with 15 points without a defeat and a 324-point win objective. It seemed improbable, but the West Indies were not without optimism, having chased down 395 to defeat Bangladesh in February.

At least not until the 13th over, when Shai Hope and skipper Kraigg Brathwaite were both removed by fast bowler Kagiso Rabada, who then coaxed Kyle Mayers into a nasty hoick that spliced to Dean Elgar.

Maharaj then grabbed the show with his hat-trick, putting an end to any dwindling West Indian dreams of an improbable triumph.

First, Powell, who had appeared cool and comfortable during most of his 51-ball innings, lost his head entirely, lifting Maharaj to deep midwicket, where Anrich Nortje hardly had to step in to take the catch just yards from the boundary rope.

Holder nudged his first delivery for Keegan Petersen to take a quick catch at short-leg, and Wiaan Mulder then pulled off a magnificent grab down to his right at leg-slip when wicketkeeper-batsman da Silva tried a leg-side flick to the hat-trick ball.

“I simply decided to bowl normally, and it was a fantastic catch by Wiaan,” Maharaj said.

“I had no idea what to do after that since the thrill of the event had overtaken all of us.”

Until Maharaj’s intervention, South Africa had relied on the brilliance of Rabada, who bowled beautifully to remove Brathwaite, who was caught at slip by Elgar, and Hope, who fought off a vicious delivery angled into his body, a faint touch off his left glove carrying through to wicketkeeper Quinton de Kock.

“My job is to bowl, but anytime we need some lower-order runs, I try to contribute,” said Rabada, who also contributed 61 runs in this Test, earning him Player of the Match honors.

With 11 wickets, Rabada was the most successful bowler on either side of the series.

When play resumed after lunch, West Indies held out for a while, but it was only a matter of time before Maharaj dismissed Kemar Roach and Jayden Seales to secure the victory.

Roston Chase did not bat due to a thigh strain received on the field on the third afternoon.

“As a batting team, we let ourselves down, but I must applaud the bowlers’ efforts,” a disappointed Brathwaite remarked.

“We were doing well but didn’t keep going. That harmed us. Things know where we went wrong, including some technological issues, and we need to fix that before the next series.”

A 22-year-old footballer died during a game