Multiple new products have been introduced by the Indian smart wearable and audio accessory business boAt, including the boAt Rockerz 333 Pro, the boAt Watch Iris, and the Airdopes 601 ANC TWS headphones, among other things. The boAt Airdopes 181 is a new TWS from the brand, and it has been posted on Amazon with all of its specifications and characteristics.

Specifications and features of the boat Airdopes 181.
The Airdopes 181 TWS earbuds have a stem-like shape and are equipped with the brand’s ENx technology, which ensures crystal clear communication during calls. 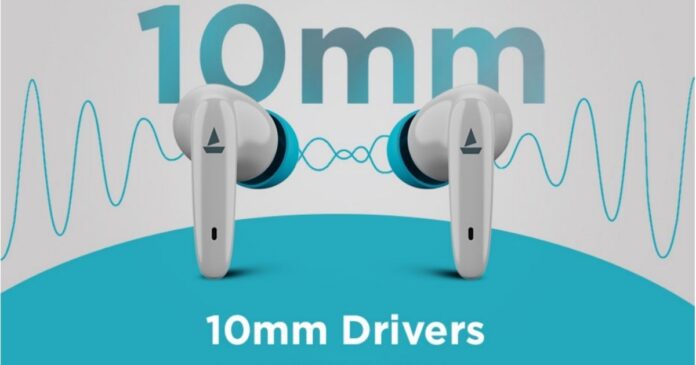 The earbuds are equipped with a 10mm driver assembly that features boAt’s trademark tuning, which will appeal to bass enthusiasts. The earphones connect by Bluetooth 5.2 and can provide up to 20 hours of listening time when used in conjunction with the charging case.

The earbuds also include a “Beast mode,” which is a low latency setting with a 65ms reaction time that allows for speedy audio response during intense gaming. The smartphone is equipped with ASAP charge capability, which allows for 90 minutes of playback after only 10 minutes of charging. It takes 1.5 hours to charge from zero to one hundred percent.

They are one of the lightest products available on the market, weighing only 2.9 grammes each. Other features include the Instant Wake n Pair feature, touch controls, an IPX4 water resistance rating, Google Assistant and Siri support, and a USB Type-C connector for charging.

The Airdopes 181 will be available in four different colour schemes: Cool Grey, Spirit White, Bold Blue, and Carbon Black, to mention a few. Additionally, the Amazon listing implies that the boAt Airdopes 181 will be offered in India in the near future, so keep an eye out for updates.

Related Topics:AirdopesboAtGamingUSB Type-C
Up Next