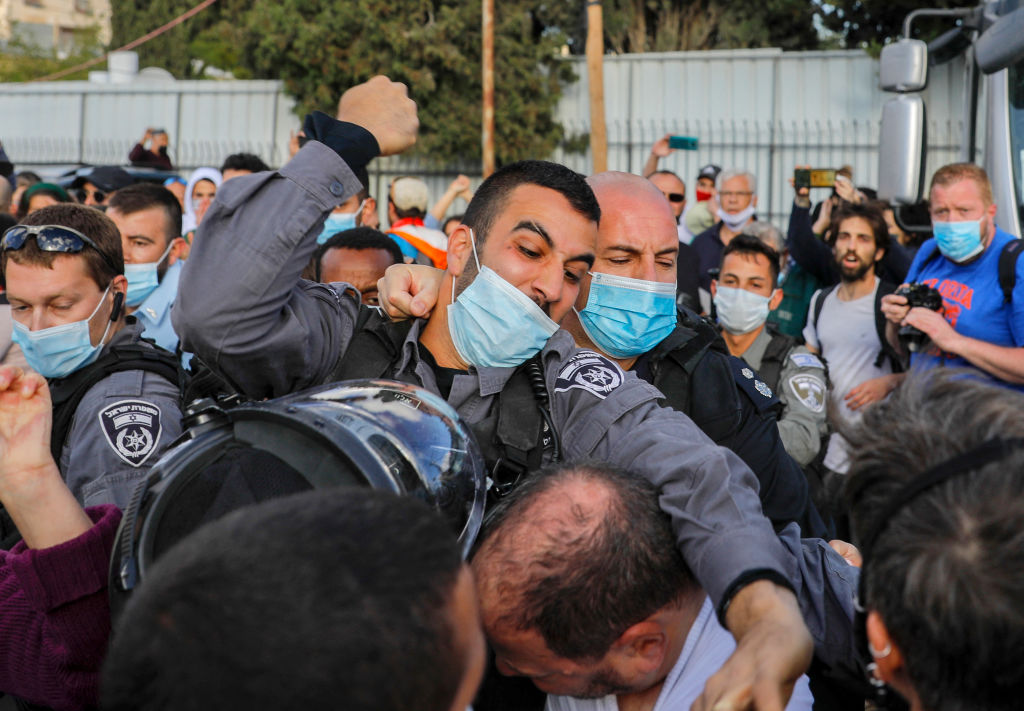 An Israeli policeman scuffles with Israeli MP Ofer Cassif, a Jewish member of the predominantly Arab Joint List electoral alliance, during a demonstration against Israeli occupation and settlement activity in the Palestinian Territories and east Jerusalem, in Jerusalem's Palestinian Sheikh Jarrah neighbourhood on April 9, 2021. - Cassif said that police beat him while he took part in a demonstration against a Jewish settlement in Israeli-annexed east Jerusalem. His spokesman Itai Aknin told AFP the injured lawmaker had been taken to hospital and that the demonstration had been "peaceful and calm" before police arrived. A police statement said initial investigations showed a protester had "attacked one of the officers". (Photo by AHMAD GHARABLI / AFP) (Photo by AHMAD GHARABLI/AFP via Getty Images)

RAMALLAH: A 1 Palestinian was killed and dozens were injured by Israeli forces’ shooting in skirmishes near the West Bank city of Nablus on Friday, according to the Palestinian health ministry and doctors.

Emad Dweikat, 38, was slain by Israeli soldiers in the village of Beita, according to the ministry.

Meanwhile, the Palestinian Red Crescent Society reported that 37 Palestinian demonstrators were hurt by Israeli soldiers during the battles in the area, while many were suffocated by tear gas.

There has been no immediate Israeli army response to the incidents in the hamlet, which has seen daily clashes with Israeli soldiers and settlers since May.

Daily protests and skirmishes erupted in the community in May after Israeli settlers, supported by Israeli army personnel, established an outpost on a mountain near Beita.

According to the United Nations Office for the Coordination of Humanitarian Affairs, the overall number of settlers’ attacks in the West Bank in 2021 has grown by 46% over the same period in 2020.

According to Yesh Din, an Israeli human rights organization, 96 percent of Israeli investigations into settlers’ aggression do not result in an indictment.