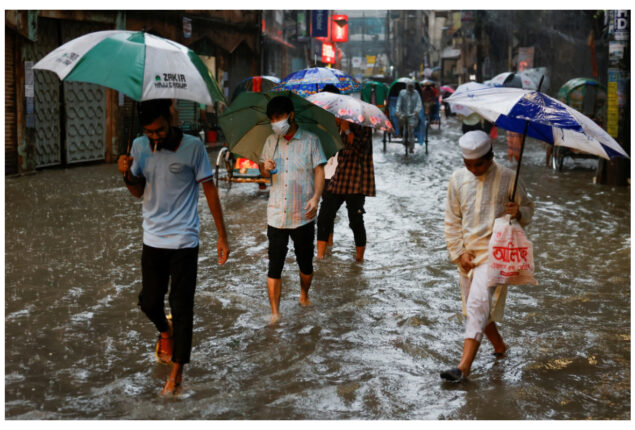 According to officials, Cyclone Sitrang slammed Bangladesh on Tuesday, forcing the evacuation of almost a million people from their homes and leaving at least 24 dead.

Cyclones, which are similar to typhoons in the Pacific and hurricanes in the Atlantic, are a constant hazard to the region, but experts think that climate change is likely making them more severe and numerous.

Late on Monday, the enormous weather system Sitrang made landfall in southern Bangladesh, although officials had been able to evacuate almost a million people beforehand.

In coastal areas, nearly 10 million people were without electricity on Tuesday, and schools were shuttered in a number of southern states.

According to police and government sources, at least 24 persons perished, the majority of them were injured by falling trees. Two of these fatalities took place in the north on the Jamuna River when a boat sank during storms.

According to an official, another worker from Myanmar who was aboard a ship died after plunging from the deck.

According to government official Jebun Nahar, “We still have not received all the complaints of losses.”

According to him, a strong wind caused the dredger to roll over and promptly sink in the Bay of Bengal. He also said that divers were looking for survivors.

Those who were evacuated from low-lying locations, such as remote islands and river banks, were put in hundreds of multi-story cyclone shelters, according to Kamrul Ahsan, secretary of the Disaster Management Ministry.

They slept in cyclone shelters that night. And many are returning to their houses this morning,” he continued.

Nearly 10,000 homes were “wrecked or damaged” by the storm, according to Ahsan, while about 1,000 shrimp farms were wiped away by flooding.

Officials claim that in some cases, police had to encourage residents to leave their homes who were unwilling to do so.

In Uganda, 11 persons were killed in a fire at a school for blind children

Jio and Nokia has collaborated for the deployment of 5G technology