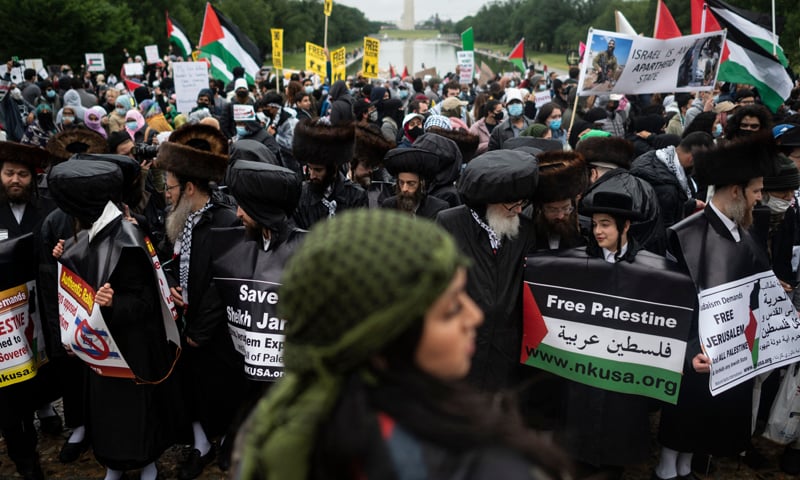 Supporters of Palestine hold a rally at the Lincoln Memorial on the National Mall in Washington, DC on May 29, 2021. (Photo by ANDREW CABALLERO-REYNOLDS / AFP)

More than 1,000 protesters marched in Washington on Saturday in favour of Palestinians, demanding an end to US funding to Israel.

The protest on the steps of the Lincoln Memorial occurred when a truce in the Gaza Strip, which halted 11 days of fighting, was still in effect.

Read Also
More than 2,300 flights have been suspended because of Omicron

“We hope to send a clear message to the US administration that the days of supporting the Israeli state without repercussions are over,” one of the protestors, 39-year-old Washington lawyer Sharif Silmi, said as he stood in a mass of protestors waving red, white, green, and black Palestinian flags.

We will oppose any politician who continues to support weaponry for Israel. We will resist them, vote against them, and finance their opponents until they are removed from power, stated Silmi.

Lama Alahmad, a Palestinian-born resident of neighbouring Virginia, claims that US public opinion is shifting in favour of the Palestinian cause.

According to Alahmad, there is a significant shift in the US toward the Palestinian cause of demanding a national nation. We simply want the world to acknowledge that we are human beings. We are not terrorists, said Alahmad, a stay-at-home mother of 43 who grew up in the United Arab Emirates before migrating to the United States almost 20 years ago.

Read Also
UAE prohibits people from traveling to Pakistan, India, and other countries

Silmi asserted that there is now widespread resistance in the United States to Israel’s treatment of Palestinians, which he compared to apartheid in South Africa.

“People have awakened, and we are resisting. There is a generational transition among young Jews, young Muslims, young blacks, and young whites. And people are working across ethnic and racial lines to bring about change, freedom, and liberation for Palestinians,” Silmi remarked.

WHO: Until 70% is vaccinated, pandemic will not be over