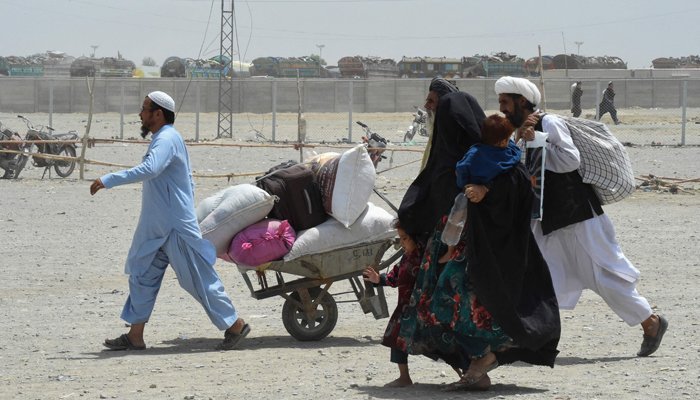 People walk towards a border crossing point in Pakistan's border town of Chaman on July 17, 2021. — AFP

KANDAHAR, Afghanistan – Over 22,000 Afghan families have fled their homes to avoid violence in Kandahar, officials said Sunday, as authorities captured four suspected insurgents in connection with this week’s rocket strike on Kabul.

Since early May, violence has increased in numerous districts, notably Kandahar, as insurgents launched a massive attack only days after US-led foreign soldiers began their final pullout.

The Taliban’s lethal onslaught has resulted in the takeover of numerous districts, border crossings, and the encirclement of several provincial capitals.

“They have all relocated from the city’s most dangerous sections to safer regions.”

Sunday saw the continuation of combat on the outskirts of Kandahar city.

“Due to the incompetence of some security officers, particularly the police, the Taliban have reached that close,” Lalai Dastageeri, Kandahar province’s deputy governor, told AFP.

“At the moment, we are attempting to organize our security troops.”

Hafiz Mohammad Akbar, a Kandahar resident, said the Taliban had taken over his residence after he escaped.

“They compelled us to flee… I am now living in a compound without a toilet with my 20-member family “Akbar stated.

Fears of combat to grow

Residents voiced worries that the fighting may intensify in the next days.

“If they truly want to fight, they should go to the desert and fight, not ruin the city,” Khan Mohammad, who relocated with his family to a camp, remarked.

“Even if they win, they will be unable to rule a deserted town.”

Kandahar is Afghanistan’s second largest city, behind Kabul, with a population of 650,000.

When the Taliban ruled Afghanistan from 1996 to 2001, the southern region was the epicenter of their dictatorship.

After being driven from power in 2001 by a US-led invasion in the aftermath of the September 11 attacks, the Taliban have led a lethal insurgency that continues to this day.

Their most recent onslaught, which began in early May, saw the organization seize control of over half of the country’s approximately 400 districts.

Earlier this week, General Mark Milley, chairman of the Joint Chiefs of Staff of the United States, stated that the Taliban appear to be gaining “strategic momentum” on the battlefield.

However, Human Rights Watch reported that there were reports of the Taliban perpetrating crimes against civilians in areas they had controlled, including the town of Spin Boldak near the Pakistani border earlier this month.

“While Taliban officials have denied any wrongdoing, mounting evidence of expulsions, arbitrary detentions, and executions in regions under their control is instilling terror among the populace,” HRW assistant Asia director Patricia Grossman said in a statement.

Meanwhile, authorities announced the arrest of four men they claimed were Taliban members, accusing them of carrying out this week’s rocket attack on Kabul.

“Momin, a Taliban commander, and three of his men have been arrested. They are all Taliban members “Mirwais Stanikzai, the ministry’s spokesman, told reporters via video message.

At least three rockets landed near the presidential palace on Tuesday, as President Ashraf Ghani and his senior officials led outdoor prayers to mark the start of the Muslim festival Eid al-Adha.

However, Daesh claimed responsibility for the incident.

Protests over Covid certification in Italy

France forbids use of drones to track migrants at border